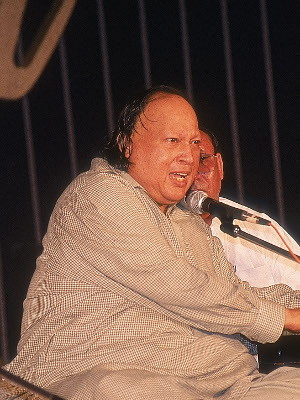 Nusrat Fateh Ali Khan is a Pakistani musician and qawwal. Easily the most eminent and important qawwal of all-time, he is known as "Shahenshah-E-Qawwali" or "King of Qawwali".

He was born on October 13, 1948 in Lyallpur (present Faisalabad), Pakistan in a family of qawwals. His father, Fateh Ali Khan, was himself a qawwal but wanted Nusrat to take up a more "respectable" profession. Seeing young Nusrat's talent and interest, he relented and started teaching him music. Nusrat Fateh Ali Khan started learning the tabla and progressed to Hindustani vocal training. His training was interrupted by his father's demise in 1964, after which his uncles, Mubarak Ali Khan and Salamat Ali Khan, took him under their wings and completed his training. The 16 year-old Nusrat did his first public performance soon after his father's death.

Nusrat became a part of his family qawwali party and became it's head when his uncle, Mubarak Ali Khan passed away in 1971. With the intensity, vocal range and spirituality of his singing, his concerts became a rage and he travelled extensively across the world to give performances. Some of his most popular songs include "Huq Ali Ali", "Allah Hu", "Mast Mast Dum Mast Qalandar", "Kinna Sona", "Jaana Jogi De Naal" and "Mera Piya Ghar Aaya".

In the later part of his career, he collaborated quite a bit with international musicians. Along with Peter Gabriel, he composed the soundtrack for the 1985 film, "The Last Temptation of Christ".  He recorded the album "Mustt Mustt" in 1990, in collaboration with Michael Brook. In 1994, he composed the soundtrack for Shekar Kapoor’s film "The Bandit Queen", along with Roger White. In the same year, he composed music for the film "Natural Born Killers". He also worked with Peral Jam's frontman, Eddie Vedder, in 1995 to compose two songs for the film "Dead Man Walking". One of these songs, "The Long Road" was reused in the 2010 movie "Eat, Pray, Love" starring Julia Roberts.

Nusrat Fateh Ali Khan holds the world record for releasing the maximum number of albums by any qawwali artist, according to the Guinness Book of World Records. He had released 125 albums as of 2001.

Nusrat was married to Naheed, his uncle, Salaamat Ali Khan’s daughter and has a daughter, Nida.