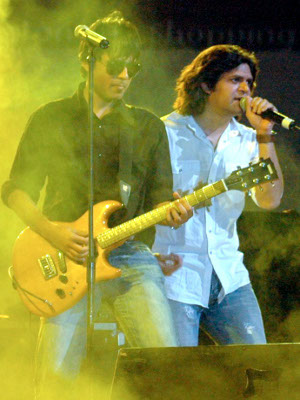 Strings are a popular international pop rock band. The band was formed in 1988 and consisted of four college students from Pakistan, Bilal Maqsood (vocal and guitar), Faisal Kapadia (vocal), Rafiq Wazir Ali (synthesizer) and Kareem Bashir Bhoy (Bass guitars). But in 1992, the band disintegrated and made a fresh comeback in 2000 with only Bilal and Faisal. This brought in a revival of music industry of Pakistan.

Their initial stint saw the release of their self titled debut album Strings in 1990 and sold over 20,000 copies in the first week itself. After two years, they released their second album which included their critically acclaimed “Sar Kiye Yeh Pahar” which aired on MTV Asia and the band became famous worldwide. The band disbanded to focus on their studies.

In 2000, when Bilal and Faisal, made a comeback, they released their third album” Duur” which renewed their popularity to greater heights. This album included “Najane Kyun” which also featured as a sound track for the Hollywood film Spider Man 2. Strings collaborated with famous artists like Hariharan and Sagarika daCosta to work on their fourth studio album. Then the band performed at Hard Rock Cafe in Dubai and then subsequently approached by Columbia records for their next. They released “Dhaani” in 2003. In May 2005, Strings released the music video of their single "Kahani Mohabbat Ki" directed by Umar Anwar. With their success in sub-continent, the band won the "Most Favorite Artist" award at the MTV Asia Awards 2005.

In 2008, they released their next album”Koi Aanay Wala Hai” which included soundtrack singles from “Zinda”(Movie-Zinda) and “ Aakhri Alvida” from Shootout at Lokhandwala.

The strings are also acclaimed for strong poetic sense in their songs, the lyrics penned by Bilas’s father Anwar Maqsood. Faisal is the lead vocalist; Bilal is the composer, guitarist and sometimes does vocals. For live concerts and international tours, they are assisted by Adeel on the lead guitar and Shakir on the bass guitar, Haider on keyboards and Qaiser on drums. When Indian cricket team toured Pakistan, Samsung invited Strings to unite with Euphoria and record a song “Jeet Lo Dil” which got them their first break through across borders which went on to become the official song of the tournament.

In 2010, Strings were made the brand ambassadors for Etihad Airways and later followed suit for Honda City and Motorola (Pakistan). Strings also took part in the movement whose motto was to revive the spirit of nationhood and community in Pakistan and to highlight the youth musical talent which was televised all over the world. In 2010, Strings released ”Ab Khud Kuch Karna Paray Ga”. In 2011, Strings performed at “Aman Ki Asha” concert. They also released the music video of “Main Tou Dekhoonga” and performed at Pakistani Embassy in Riyadh. They won Indus Music award in 2005 for the extensive contribution to music industry and the Best video of “Anjaane” and “Best Live Act in Music” (Lux Style awards in 2003 and2008). At The Third Jazz music awards won the “Best Band” and “Best Lyrics” for Zinda.