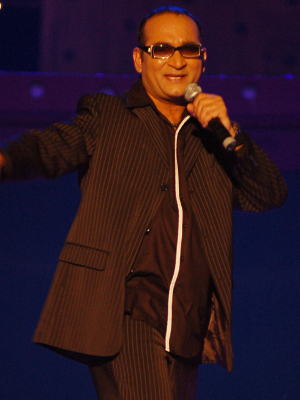 Abhijeet Bhattacharya was born in a Bengali family in Kanpur - the youngest of four brothers. He left Kanpur for Mumbai in 1982 to study Chartered Accountancy but when he got there, he decided to pursue a career in singing instead. His parents were against his decision to take up playback singing as a career, butut he persevered and got his first big break in 1984 from R.D. Burman for Dev Anand’s film "Anand Aur Anand". Abhijeet got the opportunity to sing with his idol, Kishore Kumar.

His debut movie flopped at the box office and left Abhijeet looking for work again. Luckily for him, music director Ravindra Jain allowed Abhijeet to stay with him, as a result of which he got to introduced to several Bollywood personalities. For some time, he worked as a chorus singer for music directors Jagjit Singh and Rajesh Roshan. He also made a career out of recording Kishore Kumar covers for T-Series.

After a few years of struggle, Abhijeet broke through with the film "Baaghi" (1990) for which he delievered the hit songs "Ek Chanchal Shokh Hasina", "Chandni Raat Hai" and "Har Kasam Se Badi Hai". He followed his initial success with regular hits and in 1994 he dominated the charts with songs like "Ole Ole" ("Yeh Dillagi") and "Badi Mushkil Hai" (“Anjaam”), "A Aa Eee O O O Mera Dil Na Todo (“Raja Babu”). There was no looking back after that. By the late 1990s, Abhijeet was considered a hit machine and counted among the leading playback singers along with Kumar Sanu and Udit Narayan. Some of the other movies in which he delivered hit songs included "Dilwaale Dulhaniya Le Jaiyenge" (1995), "Yes Boss" (1997), "Baadshah" (1999), "Josh" (2000), ”Dhadkhan" (2000), "Chalte Chalte" (2003), "Main Hoon Na" (2004), "Gangster" (2006) and "Om Shanti Om" (2007). It's no coincidence that Abhijeet's rise in stature as a singer coincided with Shahrukh Khan's - there were a number of films in this period in which Abhijeet was Shahrukh's singing voice.

He is the recipient of a number of awards including Filmfare and Screen-Videocon awards for playback singing as well as the Uttar Pradesh Gaurav Samman.

He is appeared as judge in a number of musical reality shows on TV like "Sa Re Ga Ma – Li’l Champs", "Star Voice of India" and "Ek Se Badhkar Ek".

Abhijeet lives in Mumbai with his wife Sumaati and two sons.