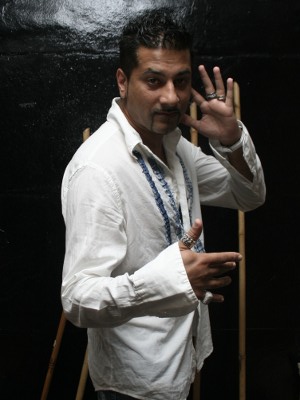 Bally Sagoo is probably the most famous and successful British Indian musician and DJ and an earlier pioneer of bhangra fusion genres. He was born Baljit Singh Sagoo on May 19, 1964 in Delhi but migrated with his family to the United Kingdom at an early age. Growing up in a ghetto in Birmingham, England, his early influences included Indian records from his father's collection and black music - motown, reggae and soul, which his friends would listen to.

With the desire to create a different kind of Indian music, he remixed traditional Indian music with western beats. Working a day job as a sales assistant, he would mix tapes during the night in his bedroom.

Finally in 1989, he released his first hit, “Hey Jamalo”, through a local Indian label, Oriental Star Agency. The hit number ushered in the Bhangra and Indi-pop music genres at clubs across the UK. Bally Sagoo's rising popularity as a DJ and musician led him to become a full-time music producer. With his unique sound and style, he produced multiple hit albums which soon became Gold and Triple Platinum records.

In 1992 Bally Sagoo produced “Magic Touch”, mixing Nusrat Fateh Ali Khan's qawaali folk songs with his own music. A new generation was introduced to qawaali with songs like “Kinna sohna” and “Mera pia ghar ayaa” which blended the mystical notes from the East with the beats of the West. The collaboration proved to be a big success and shifted Bally Sagoo's career into the mainstream.

Reinventing classic Bollywood tracks was Bally Sagoo's next project as he released the “Bollywood Flashback” in 1994 which featured hits such as “Chura liya” and “Roop tera mastana”. “Chura liya” in fact became the first Indian song to be play-listed on the BBC Radio One. His next offering showcased his skills as a writer and a music producer. The album was “Rising from the East” which included the hits “Dil Cheez” rising to No. 12 on the UK Billboard Charts in 1996 and “Tum Bin Jiya” which rose to No. 21 on the charts.

Bally Sagoo's collaborations include Micheal Jackson, who he accompanied during the latter's tour of India in 1996. He has also worked with Bollywood music directors including Anu Malik for movies like “Hera Pheri” (2000) and “Kartoos” (1999). He remixed “Aap Ki Nazron Ne Samjha” for the Aishwarya Rai starring movie, “The Mistress Of Spices”. His tracks have featured in Gurinder Chadha's “Bend It Like Beckham” and “It’s A Wonderful Afterlife”. He has also worked with Amitabh Bachchan on a musical rendering of Harivansh Rai Bachchan's poetry. “Sajna Ve Sajna” (2007), a Punjabi movie, saw him not only writing the musical score but also starring in the lead role.

In 1998, Bally Sagoo launched his own record label, Ishq Records, to promoted Asian talent including the likes of Rishi Rich, The Dub Factory and Gunjan.

Rising From The East

It's A Wonderful Afterlife (Hai Marjawaan)

It's A Wonderful Afterlife (Hai Marjawaan)