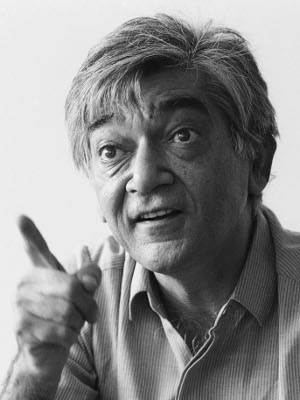 Born on April 12, 1937 in Sheikhupura, Pakistan, Gulshan Kumar Mehta, popularly known as Gulshan Bawra (‘Gulshan the madman’) was a lyricist in Bollywood.

His father, who had a construction business, got caught up in the riots during India-Pakistan partition and a young Gulshan was witness to the murder of his parents. It was his elder sister in Jaipur who then raised Gulshan and his brother. He graduated from Delhi University but always dreamt of a career in Bollywood. Not knowing how to get a leg in, he applied for a job in the railways and in 1955 was posted as a clerk in Mumbai.

In his free time he struggled to make a break in the industry. It was Kalyanji Virji Shah (of Kalyanji - Anandji) who gave him his first break in Chandrasena (1959) for which he wrote the song "Main Kya Jaanoon Kaahe Laage" sung by Lata Mangeshkar. He earned the name 'Barwa' during the making of "Satta Bazar" (1959), his first hit. The film's distributor Shantibhai Patel was impressed with the young man’s lyrics, but seeing his colourful shirt said "Main iska naam Gulshan Bawra rakhoonga. He looks like a ‘bawra’ [madman]". Gulshan tasted success with numbers like "Tumhein Yaad Hoga Kabhi Hum Mile The", "Aankde Ka Dhanda" and "Chandi Ke Chand Tukdon Ke Liye Imaan Becha Jaata Hai". Despite the success, he held on to his railways job and left it only in 1961.