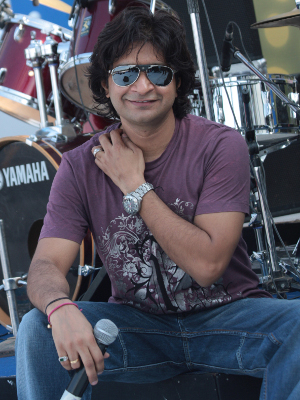 Krishnakumar Kunnath, known as KK, is a popular playback singer in Hindi, Telugu, Malayalam, Kannada and Tamil films. KK was born in New Delhi to C.S. Nair and Kanakavalli. It was in Delhi that KK grew up and completed his education.

KK discovered his talent for singing in school and was a fixture in school functions. He was also part of rock bands in school. While studying in Delhi University, he started singing for ad jingles. After college, KK worked as a marketing executive for eight months before deciding to make a career out of music. Since opportunities were limited in Delhi, he moved to Mumbai in 1994. KK sent his demo tapes to composers Louis Banks, Shiv Mathu, Ranjit Barot and Leslie Lewis and got a call back from Leslie Lewis to do a 1 minute jingle. KK’s career in music started with that jingle and Leslie Lewis became his mentor.

KK got his first break as a playback singer in the group song "Chhod Aaye Hum" ("Maachis", 1996). He followed it up with the hit song, "Strawberry Kannae" ("Minsara Kanavu", Tamil, 1997) for A.R. Rahman. However, it was his passionate rendition of "Tadap Tadap" ("Hum Dil De Chuke Sanam", 1999) that won him widespread popularity. Another important milestone in 1999 was his first independent album, "Pal", released by Sony Music. Although "Pal" was successful, he decided to focus on his career in film music.

KK is married to his childhood sweetheart Jyothi and has two children.