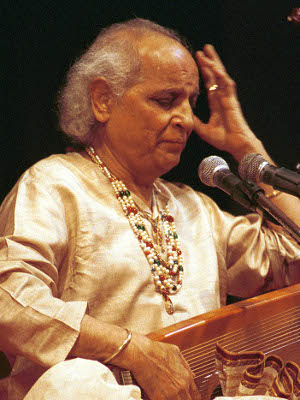 Pandit Jasraj is an Indian classical singer and follower of the Mewati Gharana of Hindustani classical music.

He was born on January 28, 1930 in Hisar, Haryana. His father Pandit Motiramji was also a classical singer who followed the Mewati Gharana style. Though Pandit Jasraj was initiated into classical music by his father, he was trained by his brother, Pandit Maniramji and then by Maharaja Jaywant Singhji Waghela.

His father, Pandit Motiramji passed away when he was only four years old, incidentally on the day he was appointed as the state musician in the court of the last Nizam.  Pandit Jasraj also trained extensively under Swami Vallabhdas of the Agra Gharana. Pandit Jasraj was also invited by Bade Ghulam Ali Khan to train under him, but he did not accept the offer because he was already a disciple of his brother, Pandit Maniramji.

Pandit Jasraj is married to Madhura, daughter of film maker V. Shantaram who he had first met during the making of the film “Jhanak Jhanak Payal Baaje” in 1955. After their marriage in 1962, they lived for sometime in Kolkata before moving to Mumbai.  They have two children, Shaarangdev Pandit and Durga Jasraj.

Pandit Jasraj used to accompany his brother and guru, Pandit Maniramji as an accompanying tabla player. He left when he was 14 years old, unhappy at the way he was being treated and swore never to cut his hair till he learnt to sing. He finally cut his hair when he got the opportunity to perform on All India Radio (AIR), where he sang the Raag Kaunsi Kanada. Pandit Jasraj’s voice extends across three and half octaves. He vocalizes in absolute clarity and perfect diction, the typical Mewati Gharana style of Khayal.

He has done extensive research in Haveli Sangeet under the guidance of Baba Shyam Manohar Goswami Maharaj and created a number of compositions, called “bandish”. But his most important contribution to Indian classical music is the conceptualization of a unique form of “Jugalbandhi” based on the “Moorchana” system. In this style of jugalbandhi, a male and a female vocalist will each be singing different ragas, in his or her own scales. This style of jugalbandhi has been called “The Jasrangi”. He is also an expert in the Bhairav family of raags and legendary raags like “Darbari Kanada”, “Miya Ki Malhar” and “Jog”. He is also well versed in rare raags like “Gyankali”, “Abiri Todi”, “Dhanashree”, “Purba”, “Bhavsakh”, “Devsakh”, “Charju Ki Malhar” and “Gunji Kanada”.

The “Pandit Motiram Pandit Maniram Sangeet Samaroh” is an Indian classical music festival organized by Pandit Jasraj annually as a tribute to his father and brother.