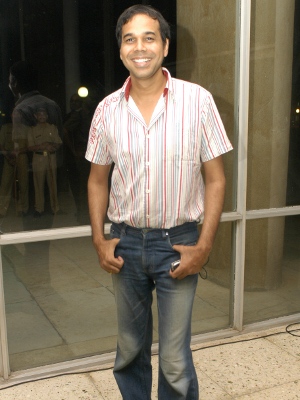 Composer Sandesh Shandilya was born in Agra, Uttar Pradesh. Early on, he knew he wanted to be a musician and started training under renowned classical vocalist and sarangi player, Ustad Sultan Khan. It was no surprise, when he left his engineering studies to pursue music. Some of his first assignments as a composer were for non-film albums, “Piya Basanti” (2000) being the most popular among them. "Piya Basanti" had a number of songs sung by his guru Ustad Sultan Khan and won accolades at the MTV Video Music Awards in 2001.

Though “Piya Basanti” was well recognised and appreciated, it wasn’t until the song “You Are My Sonia” (“Kabhie Khushi Kabhie Gham”, 2001) became a raging hit that Sandesh Shandilya was recognised. He was often asked to compose a song or two in films like “Road” (2002), “Rules - Pyar Ka Superhit Formula” (2003) and so on, often alongside other composers. “Chameli” (2003) proved to be his greatest success till that point with songs like “Bhaage Re Mann” and “Sajna Ve Sajna” proving his versatility as a composer. “Socha Na Tha” (2005) and “Uff Kya Jadoo Mohabbat Hai” (2004) were films he composed for independently, but they failed to bring him the fame he may have hoped for.

The song “Aaoge Jab” (“Jab We Met”, 2007), sung by Rashid Khan and composed by Shandilya, was another high point in his career. Some of his other films include Ketan Mehta’s “Rang Rasiya” (2008), “Meerabai Not Out” (2008) and “Tum Milo To Sahi” (2010). He has also composed a number of non-film albums with K.S. Chitra, Hariharan, Sadhna Sargam, Shreya Ghoshal and Shubha Mudgal.