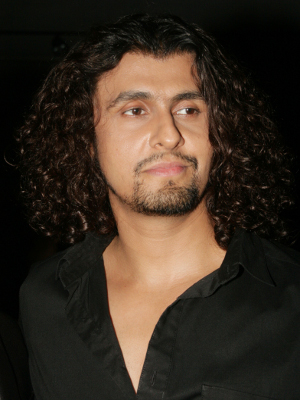 Sonu Nigam was born on July 30, 1973 to Agam Kumar Nigam and Shobha Nigam in Faridabad, Haryana. He had briefly spelt his name as “Sonu Niigaam” in accordance with numerology, but reverted to his original name after some time.

Sonu Nigam was only three years old when he joined his father on stage to sing the popular Rafi song "Kya Hua Tera Waada". He also acted as a child artiste in films like "Kaamchor" and "Ustadi Ustad Se" in 1982 and "Humse Hai Zamana", "Taqdeer" and "Betaab" in 1983. After completing his in Delhi, he moved to Mumbai to pursue a career in music and joined his father, who was a stage singer who sang at wedding parties and festivals.

Sonu's early years in Mumbai were not easy. He got his break in the industry as a "Rafi clone" singing covers of Mohd. Rafi songs for T-Series' "Rafi Ki Yaadein" series. After years of struggle, Sonu debuted as a playback singer in Bollywood in 1993 when Usha Khanna introduced him to music director Amar - Utpal, who gave him the opportunity to sing for the film "Aaja Meri Jaan".

1995 was a milestone year for Sonu. Two things happened this year that would launch Sonu as a force to reckon with. First, he hosted the first episode of the one of the first TV singing competition show "Sa Re Ga Ma". The show captured the nation's imagination and endeared Sonu to the public. Second, he sang the song "Acha Sila Diya Tune Mere Pyar Ka" in the film "Bewafa Sanam" which went on to become his first hit in Bollywood.

In the 2010s, Sonu cut back on his playback singing, a strategy that seemed to work with "Abhi Mujh Mein Nahin" ("Agneepath", 2011) sweeping award shows.

By the mid-2000s, Sonu had started experimenting outside Bollywood. Apart from Hindi, Sonu has sung in many languages, including Kannada, Tamil, English, Bhojpuri, Marathi, Bengali and Punjabi. His skill with languages is such that he attained superstar status as a playback singer in Kannada films. His songs "Mungaru Maleye" and "Anisuthide Yako Idhu" in the 2006 film "Mungaru Male" were blockbuster hits. He released a Kannada album called "Neene Bari Neene" in 2009 which was also a big hit.

Sonu Nigam also hosted a radio show called “Life Ki Dhun with Sonu Nigam” on Radio City 91.1 FM in 2006 and got the opportunity to interview a number of famous personalities on his show, including Lata Mangeshkar.

Sonu Nigam has two sisters, Meenal and Neetika. Neetika is also a talented singer. Sonu married Madhurima on February 15, 2002 and the couple has a son, Nevaan who was born on July 25, 2007.