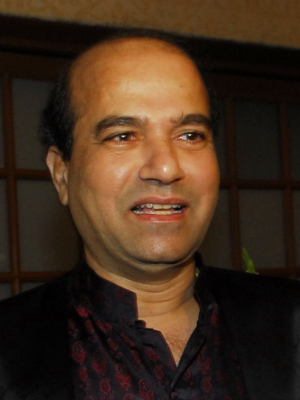 Suresh Ishwar Wadkar is a playback singer primarily known for his songs in Marathi and Hindi films. He was born in Kolhapur, Maharashtra in 1954. At a very early age, he got formally trained in classical music at the Acharya Jiyalal Vasant's Sageet Niketan. Soon, Suresh was learning not only vocal Hindustani music, but also the tabla, sitar and kathak. He also began performing on stage shows across the country. Suresh got his Sangeet Prabhakar degree (equivalent to B.Ed.) from the Prayag Sangeet Samiti, to which the Sangeet Niketan was affiliated. He then joined Arya Vidya Mandir as a music teacher.

In 1976, he was invited by the Sur Singar Samsad, to sing in the Haridas Sangeet Sammelan. On the suggestion of the Samsad's director, Suresh enrolled in the Film Sangeet Sammelan competition and won the Madan Mohan award for the Best Male Singer. Music director Ravindra Jain, who was one of the judges at the competition, promised him a playback singing opportunity and true to his words, picked him as the lead singer for the film "Paheli" (1977). The songs of the film, specially his duet with Hemlata, "Sona Kare Kaise Jhilmil", were quite popular and helped Suresh get a slew of playback singing offers.

He has tried his hand as a music director with two Marathi films and a Hindi film "Dil Churaya Aapne" (1997). His debut film as music director "Ashi Hi Dnyaneshwari" won him the Best Music Director Award from the Maharashtra Government.

Suresh Wadkar was a judge on the Indian TV singing show Sa Re Ga Ma Pa Little Champs International and at the 2005 Sanjeet Awards. He runs a music school, the Ajivasan Sangeet Academy, with centres in Mumbai and in several cities in the USA.