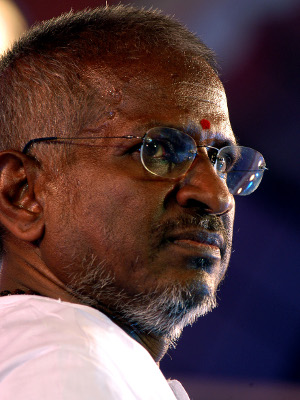 Gnanadesikan was born on June 03, 1943 (although he celebrates in on June 2) in a village called Panniapuram in Theni district of Tamil Nadu. At school, he was known as Raasaiyya. In 1968, he learnt to play musical instruments like the guitar and piano from a music teacher called Dhanaraj who called him Raaja. He then went to London’s Trinity College to study instrumental performance and specialized in classical guitar.

Then the Tamil film producer of his debut movie, “Annakilli”, Panchu Arunachalam, added “Ilaya” (meaning “young”) before his name. Thus he got the name “Ilayaraaja”. His genre involves combining the earthiness of the sounds of Tamil folk music with Western harmonies as well as raagas of Carnatic music.

Growing up in a rural environment, he joined his elder step-brother, Pavalar Varadarajan’s music troupe when he was 14 years old, which gave him an opportunity to tour the state extensively and understand the musical tastes of the audiences.  His wife Jeeva and he have three children – two sons, Karthik Raja and Yuvan Shankar Raja and a daughter, Bhavatharini.

IIayaraaja’s introduction to film music happened in the late 1960s when he was hired to assist Kannada film music composer G.K. Venkatesh. It was to be a long association, with the duo working together in over 200 Kannada films. In 1976, Tamil film producer Panchu Arunachalam gave Ilayaraaja his first break in “Annakkili”. Ilayaraaja discovered his oeuvre, composing songs that resonated with Tamil poetry and music. This film ushered in a new sound in Tamil film music, and the era of Ilayaraaja’s music.  Some of his most successful films from the ‘70s and the 80s include “Saagara Sangamam”, “Sindhu Bhairavi” and “Rudra Veena”. Ilayaraaja won the National Award for best music for these films in 1984, 1986 and 1989 respectively. In the‘90s Illaiyaraja was particularly appreciated for his music in films like Mani Ratnam’s ”Anjali” and “Thalapathi”. Although mostly associated with Tamil and Telugu films, he has also contributed some memorable tunes to Hindi cinema, in movies such as “Shiva”, “Lajja”  “Cheeni Kum” and “Paa”.

Ilayaraaja’s contribution to world music exceeds beyond film music, he has composed devotional and religious music, composed diverse musical orchestras (oratorios), Carnatik kritis and instrumental compositions and been part of several fusion and world music productions. He was the first Asian to compose a symphony for the Royal Philharmonic Orchestra, London, conducted by John Scott in July 1993. Ilayaraaja is also a lyricist and poet. He has been conferred the title of Isaignani (Savant of Music), an honorary doctorate by Annamalai University in Tamil Nadu, his tune “Rakkamma Kaiya Thattu” from Thallapathi (1991) is listed in a 2003 BBC poll at number four in a list of ten all time world greatest hits and he is also the recipient of the Padma Bhushan, the country’s third highest civilian honour.

How To Name It?