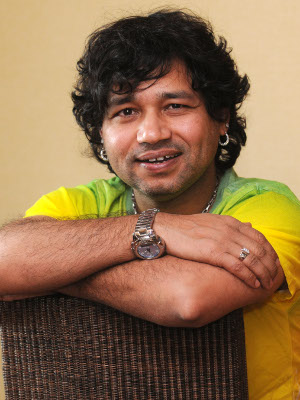 Kailash Kher, the diminutive Kashmiri music composer and singer, was born on July 07, 1973 in Meerut, Uttar Pradesh. With his earthy and raw voice, his style of music is best described as an eclectic mix of the contemporary with shades of classical Hindustani, Sufi and folk music.

As a child, he learnt music from his father, Pandit Mehar Singh Kher, who was a priest. When he was 12 years old, he started learning classical music from Pandit Kumar Gandharva. Kailash was deeply influenced both by the Sufi traditions of divinity and devotional music even at a very young age.

While still trying to learn music, Kailash Kher tried his hand unsuccessfully at many professions, including the business of exports. He then moved to Mumbai, as suggested by his elder brother, to find work. His first assignment was a jingle for the Nakshatra brand of diamond jewellery. Then came the big break. He sang the song "Allah Ke Bande" in the film "Waisa Bhi Hota Hai – II" (2003) which shot him to fame overnight.

Kailash then re-invented himself when he formed the band Kailasa with Naresh and Paresh Kamath. They recorded their first Indipop album ”Kailasa”. The album, specially the song "Teri Deewani", baecame a chartbuster and established Kailash Kher as a singer who equally comfortable in Bollywood and the indie scene. The band went on to release many other albums including "Jhoomo Re" (2006), Chaanan Mein" (2009) and "Rangeele" (2012).

While pursuing a successful indie career, Kailash continued to sing for Bollywood and even sang for films in other languages including Kannada and Tamil. His song "Hale Patre" in the Kannada movie "Junglee" (2009) was a huge hit.  Kailash tours extensively and draws large crowds to his concerts. He was part of the concert tour, “The Incredibles” in 2007, which included Asha Bhosle, Sonu Nigam and Kunal Ganjawaala. In March 2011, he sang at the Kennedy Center in Washington D.C., for the Maximum India Festival.

Kailash Kher has also appeared as a judge on television shows like "Indian Idol"  and "IPL Rockstar". He has also been chosen as the Honorary Goodwill Ambassador for Nepal Tourism for the year 2011.

Kailash is married to Sheetal Bhan, who is the niece of film director Ashok Pandit and the couple have a son, Kabir Kher.