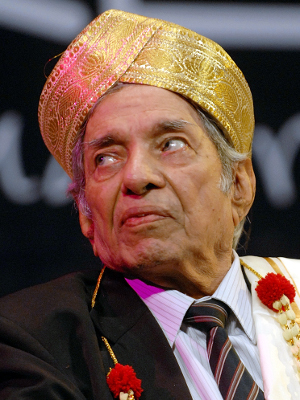 Ravi came to Mumbai at the age of 24 to be a singer. To earn some money, he initially took up odd jobs of repairing appliances. The fact that he had no classical training never came in his way. He started out as a chorus singer for Hemant Kumar in films like “Naujawan” (1951) and “Anand Math” (1952). His first film as an independent composer was for the film “Vachan” (1955). Songs like “Chanda Mama Duur Ke” and “O Janewale Babu” were well appreciated.

The former has, in fact, remained one of the most widely sung lullabies till date! Also, inspite of lack of classical training, he quickly proved that he could pull of complex compositions like “Chaudhvin Ka Chand Ho”  (“Chaudhvin Ka Chand”, 1960). Also, he proved his mettle at composing a slightly Western, fun song like “CAT Mane Billi” from “Dilli Ka Thug” (1958).

Apart from O.P. Nayyar, the other person that singer Mahendra Kapoor attributes his success to is Ravi. Songs like “Chalo Ek Baar Phir Se” from “Gumraah” (1963) earned Mahendra Kapoor popularity under Ravi. The song “Babul Ki Duwayen Leti Jaa” from “Neel Kamal” (1968) never fails to touch a chord, even today! He composed music for the film “Gharana” (1961), which brought him his first Filmfare Award for Music Direction. Moreover, the 1965 film “Khandaan” not only won him his second Filmfare Award, it also fetched awards for Lata Mangeshkar and Rajendra Krishnan for playback singing and lyrics. All for the song “Tumhi Mere Mandir.” Years later, the Salma-Agha starrer “Nikaah” (1982) was to complete the finale before he took a break.

The last composition by Ravi for Bollywood was for the film Ek Alag Mausam ( 2003).