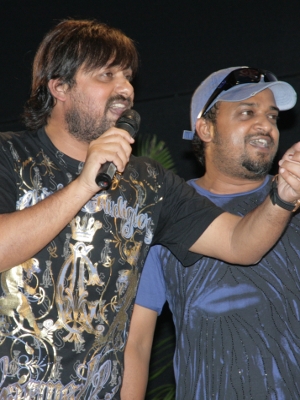 Sajid Ali and Wajid Ali are brothers and a popular duo in Bollywood in today’s world. They were born into a musical family to Ustad Sharafat Khan a tabla player and their grandfather was Ustad Abdul Latif Khan who was awarded the Padma Shri. Sajid-Wajid learnt music from Ustad Allahrakha Khan and his brother Das Babu.Sajid had tried his hand at import-export before turning into a music director and also worked with their father on an album which never got released.

Sajid-Wajid introduced the concept on 28 Non-Stop Remix for T-series. Then they composed music for a non-film album, “Marhaba” with Sabri brothers. They got their first break with Sohail Khan’s, Pyar Kiya to Darna Kya with the song ‘Teri Jawani Badi Mast” (1998) which was a hit qawwali. This was followed by Sonu Nigam’s non-film album,”Deewana” (1999) with hit numbers, “Deewana Tera”, “Ab Mujhe Raat Din” and “Iss Kadar Pyaar Hai”. In the same year, they gave popular hits with, “ Hello Brother”, “Hata Saawan Ki Ghata”, “Chandi Ke Daal Par” and “Hello Brother”.

Sajid-Wajid have been nominated for many films such as “ Mujse Shaadi Karoge”, “Partner” and have won Star Screen Award, Apsara Award, Zee Cine Award Filmfare, Lion Club all for Best Music Director in 2011 for Dabangg.