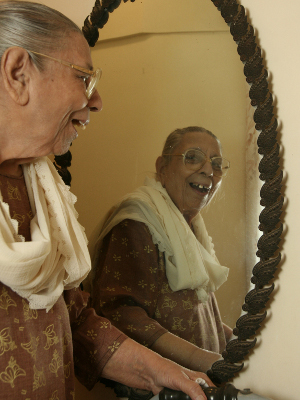 The reclusive queen of yesteryears, Shamshad Begum, was born on the 14th April, 1919 in Lahore and was drawn to music since childhood. In 1937, at the age of eighteen, she made her radio debut in Lahore, where she sang naats or Isalmic devotional songs. Her voice was noticed by composer Ghulam Haider, who used her voice for his film "Khazanchi" (1941). The song "Ek Kali Naazon Ki Pali" from this film became overnight sensation.

In 1944, she shifted to Bombay along with Ghulam Haider and his team, to further her career. It was around this time that Mehboob Khan used her voice for his film "Humayun" (1945). Although Amirbai Karnataki was the most sought after female playback singer, Shamshad Behum made an instant impact and started getting several singing offers.

Some of her famous songs from this era, include "Armanon Ki Basti Me Hum Aag Laga Baithe" ("Shirin Farhad", 1945) and "Dil Thandi Hawa Mein" ("Shama", 1948). Actress Nargis was often the face for her voice, notable amongst them "Taqdeer" (1943), where the song "Oh Jaane Wale Aaja" established the singer-actor pair. She was also one of the few singers who did not hesitate to record Westernised songs like "Meri Jaan Sunday Ke Sunday" (Shehnai, 1947). The song "Mere Piya Gaye Rangoon" ("Patanga", 1949) is etched in public memory as a trademark Shamshad Begum song.

The rise of the Mangeshkar sister led to fewer offers, and as years progress, Shamshad Begum came to be identified with duets.

Shamshad Begum has sung songs not only in Hindi, but also in Punjabi, Bhojpuri, Rajasthani, Pashto and even in Tamil. When she left for India from Lahore, she had promised her father that she would keep away from the cameras – a promise she maintains till date. Away from the glare of media and the blinding flash of cameras, she still lives the life of recluse in Mumbai, peeking out occasionally to accept an award, like the Padma Bhushan she bagged in 2009.