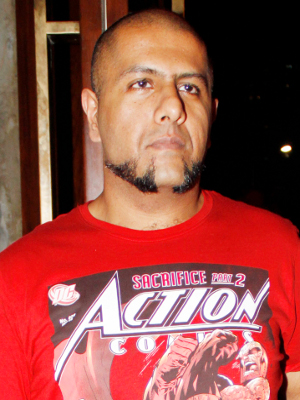 Vishal Dadlani is a multi-faceted musician. Apart from composing for films as part of the Vishal - Shekhar duo, he is a lyricist, a playback singer as well as the frontman of the Mumbai based elctro-rock band Pentagram. He founded Pentagram in 1994 after a chance meeting with drummer Shiraz Bhattacharya and released their debut album "We Are Not Listening" in 1996. His journey into the world of film music began in 1999 when Shiraz introduced him to the director of “Pyaar Mein Kabhi Kabhi”, Raj Kaushal, who was a friend. It was for this film that he worked with Shekar Ravjiani for the first time and went on to team up with him as Vishal - Shekhar.

With the success of Vishal - Shekar and also the band Pentagram, Vishal's stature as a musician grew despite the fact that he had no formal training in music.

Pentagram, the electro-rock band he is a member of, has performed at the Sundance Music Festival in 2003. In 2005, they performed at the Glastonbury Music festival along with Coldplay, Chemical Brothers, Fat Boy Slim and other well known contemporaries.

Along with partner Shekhar Ravjiani, Vishal Dadlani has appeared as judge on many talent shows on TV.

Vishal is quite active politically and supports the India Against Corruption movement. He lives in Mumbai with his wife Priyali.

Don't Have To Lie