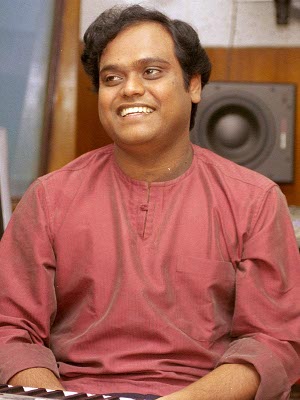 Harris Jayaraj, born on 8 January 1975 is a famous Indian film composer and music director. His soundtracks for Tamil, Telugu and Hindi movies are very popular. Harris was born in Chennai and completed his early education at the Krishnaswamy Matric School in Nungambakam. Harris from a young age was interested in music and his father, S M Jayakumar who was a popular guitarist was his inspiration.

Harris started learning Carnatic music at the age of six and later continued to concentrate more on music compositions.

Harris went on to study at the Trinity College of Music, London and was the top scorer from Asia. At an age of 25 he had already worked with 25 music directors in Tamil, Telugu, Hindi, Bengali and Oriya and had worked in more than 600 projects by the year 2000. He was inspired by noted musicians and composers like M. S. Viswanathan, A. R. Rahman, Hans Zimmer and percussionist Aruljothi Balagopal.

Harris got his first lucky break with the movie ‘Minnale’ and especially the song Vaseegara’. For his efforts he won the South Filmfare Awards for Best Music Director and broke the nine year continuous record previously held by composer and music director A. R. Rahman. The movie directed by Gautam Menon was a hit and so were the soundtracks. The Hindi version of the movie ‘Rehnaa Hai Tere Dil Mein’ also directed by Gautam Menon was a hit and the soundtrack was directed by Harris.

Harris was later given the opportunity as music director for the Tamil films “12 B” and “Majnu” which were well received by audiences for their soundtrack. Harris later composed his album “Lesa Lesa” which was very popular. His compositions for the movie “Samurai”, “Saamy” and “Kovil” were also well received by his fans. His next composition was for the hit movie “Kaakha Kaakha” -directed by Gautam Menon and starred Suriya and Jyothika. The song “Uyirin Uyire” was on the top of the charts for a long time and received three awards, Filmfare, Tamil Nadu State Film Award and ITFA Best Music Director Award which catapulted him to fame.