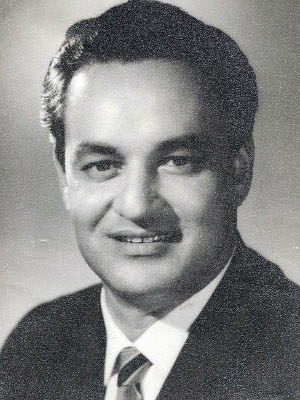 Mukesh Chandra Mathur was born on July 22, 1923, in a small middle class family in Delhi. As a young boy, Mukesh was interested in acting and singing. Although he studied only upto Class 10, he was able to get a job as Assistant Surveyor in the Department of Public Works.

Motilal, his relative, was the first person in the film industry who noticed Mukesh’s singing talent and took him to Pandit Jagannath Prasad for singing lessons. During this time Mukesh was given a chance to act in a Hindi film "Nirdosh" (1941) which failed at the box office. Mukesh had his first hit as a singer in the industry in 1945. The song "Dil Jalta Hai To Jalne De" from the film "Pehli Nazar" became very popular but as many observed, Mukesh sang in the voice of his idol, K.L.Saigal.

With experience and under the guidance of composer Anil Biswas, Mukesh found his own voice and style. Over the next few years, he delivered several hits songs to cement his place in the industry including "Gaaye Ja Geet Milan Ke" ("Mela", 1948), "Jeevan Sapna Toot Gaya" ("Anokha Pyar", 1948) and "Chhod Gaye Baalam" ("Barsaat", 1949).

Around this time, Mukesh - a handsome, strapping man - decided to focus on his acting career. This was a decision he would come to regret because while his acting career never took off, between 1954 and 1956 he sang just a handful of songs. His debut film as actor, "Mashooqa" (1953) with Suraiya flopped miserably and his second film "Anuraag" (1956), in which he turned producer and composer as well, was not even released. This was a period of struggle for him, to the extent that his children Nitin and Ritu were turned out of school as he was unable to pay their tuition fees.

Mukesh returned to playback singing but had to struggle to make a comeback because offers were few and far between. He gradually revived his singing career with songs like "Yeh Mera Deewanapan Hai" ("Yahudi", 1958), "Suhana Safar Aur Yeh Mausam Haseen" ("Madhumati", 1958) and "Woh Subah Kabhi To Aayegi" ("Phir Subah Hogi", 1958). In 1959, with a Filmfare Award for Best Male Singer for "Sab Kuch Seekha Humne" ("Anari"), Mukesh finally started a new phase in what went on to become a very successful career.

Mukesh continued his successful record in the 1970s and in this decade he had awards to show for it. He won Filmfare Awards for Best Male Playback Singer for "Sabse Bada Nadaan" ("Pehchan", 1970), "Jai Bolo Beimaan Ki" ("Be-Iman", 1972) and "Kabhi Kabhie Mere Dil Mein" (Kabhi Kabhie", 1976) and the National Award for the song "Kahin Baar Yun Bhi Dekha Hai" ("Rajnigandha", 1974).

On August 27, 1976, Mukesh passed away due to a sudden heart attack during a concert in Detroit, USA. He was survived by five children. One of them Nitin Mukesh sang for Bollywood and his grandson Neil Nitin Mukesh is an actor.