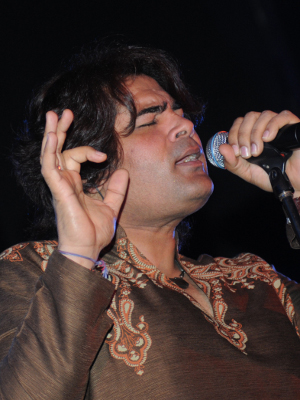 Shafqat then became the lead vocalist of the Pakistani rock band Fuzon. He left the band in 2006 to concentrate on his solo career. Some of Shafqat Ali’s most popular works are, “Aankhon Ke Saagar”, “Khamaj” and “Ankhiyan”. He also sang the song, “Phir Wohi Raaste” and “Allah Megh De” for a Pakistani film named Ramchand Pakistani.

Shankar Mahadevan introduced Shafqat to Bollywood in the movie ‘Kabhi Alvida Na Kehna’ and he sang the song, “Mitwa” which catapulted Shafqat to stardom. He also was the voice behind the song, “Yeh Honsla” (Dor) and “Shukriya Zindagi”(Aashayen). He also sang background for the films, “Hello”, “Mumbai Cuttings”, and “Red Swastik”. His songs, “Mora Saiyan” and “Tere Bina” were featured in Hyderabad Blues 2. An album, “Tabeer” based on folk and Sufi was released in September 2008 in Pakistan. Not only has Shafqat written most of the songs in it, barring a few Sufi tracks, he has also set them to music and the video of one of the songs is being aired both in Pakistan and India. Recently Shafqat sang, “Tere Naina” for My Name is Khan. He has also lent his voice for the song, “Bin Tere” (I Hate Luv Storys),which was nominated for the filmfare Award for Best Male Playback Singer, “Tum Mile” (Rock version in Tum Mile), “Kyun Mein Jagoon” (Patiala House) and also sung the song, “Pakhija” in the sufi rock album, “Arrk”. Latest to join this list is the Sufi version of the song “Jaane Kyon” (Always Kabhi Kabhi)

Shafqat released his second album,” Kyun Dooriyan” in 2010 and it was nominated for Best album in Indipop category in the Mirchi Music Award 2011. Shafqat was also awarded the President’s Pride of Performance Civil Award on August 14, 2007.