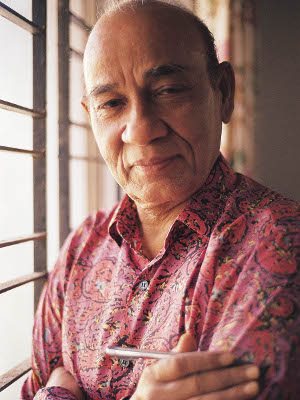 Shyamalal Bahu Rai, who used Indeevar as his nom-de-plume, was born in the Barua Sagar district of Jhansi, Uttar Pradesh. Bitten by the film bug, he moved to Bombay with the sole intention of becoming a lyricist. In a long spanning career, he worked with great composers like Roshan in the 40s to Viju Shah, Aadesh Shrivastava, Anand Raaj Anand and Jatin - Lalit in the 90s.

In the 80s, Indeevar came to be associated with highly commercial music. Despite some crass lyrics, he continued to enjoy success with a series of southern film remakes with hit songs like ”Nainon Mein Sapna” (Himmatwala, 1983) and “Tohfa Tohfa Laya”, (Tohfa, 1984). He may have been past his prime but he remained very prolific with music directors like Bappi Lahiri and Rajesh Roshan.

Despite his advancing age, Indeevar refused to slow down and kept writing film lyrics till he passed away in 1999.