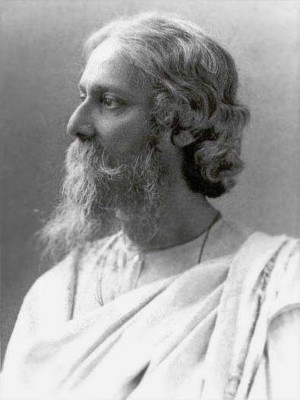 Rabindranath Tagore (May7, 1861–August 7, 1941) was a Bengali polymath who changed the Bengali concept of art, literature and music. His contributions to literature include “Gitanjali”, “The Religion of Man” and “The Home and The World”. Tagore’s success was in voicing the conflicts of all - big, small, rich and poor. He is also credited with being the pioneer of the short story genre in Bengali.

Rabindranath Tagore composed over 2230 songs called “Rabindra Sangeet” which exhibit influences of the thumri style of Hindustani music. These songs blend well with his literature as they are mostly poems, parts of novels, stories or plays lyricised. Famously, two of his compositions, “Jana Gana Mana” and “Amar Shonar Bangla” have become national anthems of India and Bangladesh respectively. Many film directors including Satyajit Ray, Ritwik Ghatak, Mrinal Sen, Tapan Sinha, Kumar Shahani and Nitin Bose have all included Tagore’s songs in their films. His songs have also been used in British, Australian and European movies.

As the youngest of thirteen children, he was raised mostly by servants as his mother died early and his father travelled extensively. He was homeschooled and groomed by one of his older brothers, Hemendranath. He married Mrinalini Devi in 1883 and had five children, of whom two died in childhood. He died on 7 August 1941 at the age of eighty, following years of illness.

He was also the first Non-European to win the Nobel Prize (for Literature) in 1913. Following this he was knighted by The British Crown in 1915 but renounced it following the Jallianwala Bagh massacre of 1919.

Gulzar In Conversation With Tagore