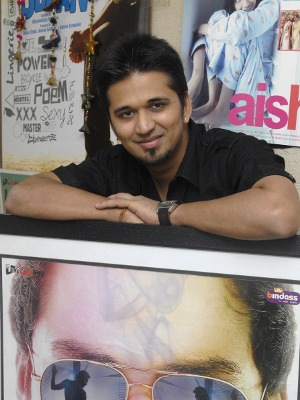 Amit Trivedi has come a long way from being Indian film music’s most talked about ‘new-kid-on-the-block’ who composed for "Aamir" (2008) to one of the most loved and respected composers of Bollywood. Amit Trivedi was drawn to music at an early age and signed up for college bands when he grew up.

After college, he formed a band called OM and got lucky when Times Music signed them up. While the album didn't do well, the associations he formed with the likes of vocalist, Shriram Iyer, guitarist, Amartya Rahut and lyricist, Amitabh Bhattacharya, enriched his work for years to come. Amit then went solo, composing for theatre productions, background score for TV serials and advertisement jingles. An acqaintance of his from Audio Garage Recording Studio got him a job with Sony BMG, where he composed music for non-film albums of Abhijeet Sawant, Prashant Tamang and other reality show winners.

Amit's Bollywood break came when his friend, singer Shilpa Rao introduced him to director Anurag Kashyap. Anurag Kashyap signed him up for "Dev D" but after working for the film's score for six months, he had to stop as the film's work stalled. It was then that Anurag recommended Amit Trivedi to his one-time assistant director, Rajkumar Gupta who was directing his debut film "Aamir" (2008). So while, Amit Trivedi signed up for "Dev D" first, he made his debut for "Aamir". The music of "Aamir" was well-received for it's freshness but it was really with Anurag Kashyap’s later-revived “Dev D” (2009) that Amit Trivedi captured the nation's imagination. "Dev D" and its music reached cult status and with songs “Saali Khushi” and “Emosanal Atyachar”, Amit Trivedi bagged Filmfare's R.D. Burman Award, Filmfare Award for Best Background Score as well as the National Award for Best Music Direction! Apart from composing music, Amit Trivedi also lent his voice to “Saali Khushi”, “Nayan Tarse” and “Duniya” for the film.

Amit Trivedi today is a man to reckon with and is recognized for the freshness of his music and his ability to continuously imbibe new elements and new artists into his music. Apart from composing for films, Amit Trivedi has also composed the title track for the UTV-Bindaas’s “Big Switch” and produced arguably the best episode of the Indian edition of Coke Studio in Season 2, with songs like "Nirmohiya", "Bari Bari", "Yatra" and "Badri Badariya".