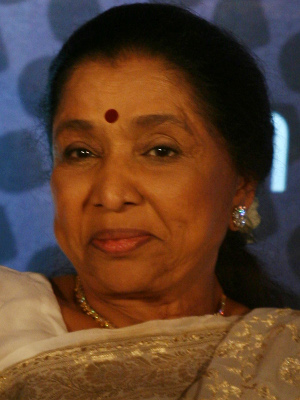 Asha Bhosle began her career as a playback singer in 1943 and has continued for over six decades now, having sung for over 1000 Bollywood movies. Her voice has been heard in over 20,000 songs in 14 languages.

Asha and her elder sister, singer Lata Mangeshkar, were born in Goar in Sangli, Bombay Presidency and took to music to support their family after their father passed away when Asha was nine.

While her first film song was “Chala Chala Nav Bala” for the Marathi movie “Majha Bal” (1943), she debuted in Hindi with “Saawan Aaya” for Hansraj Behl's “Chunariya” (1948). However, her first solo Hindi film song was for the movie “Raat Ki Raani” (1949).

At 14, she eloped and married Lata’s personal secretary, Ganpatrao Bhosle. The marriage ended badly when she was pregnant with her third child. When she began her career, Asha sang for assignments refused by the day’s leading singers: singing for vamps or for second-grade movies. Though singing in Sangdil (1952), Boot Polish (1954) and C.I.D. (1956) helped her gain recognition, her career really picked up in 1957 due to the patronage of two of the most prominent music directors of that time. Her first big break came with O.P. Nayyar's Naya Daur (1957). O.P. Nayyar, who never used Lata Mangeshkar’s voice in his entire career, decided to use her sister for his leading female voice. As fate would have it, S.D. Burman also had a falling out with Lata the same year and worked with Asha for the next six years. It was during this period that Asha came into her own and grew out of her sister’s shadow.

O.P. Nayyar not only supported Asha’s career, he also gave her the much needed emotional succour she needed after her marriage ended. Unfortunately, their relationship also came to an end. One of Asha’s last songs for O.P. Nayyar - “Chain Se Humko Kabhi” (“Pran Jaye Par Vachan Na Jaye”, 1973) - won her a Filmfare aware but she refused to accept it.

As Asha’s partnership with O.P. neared its end, a new and an even more significant collabaration began. Starting with the 1966 movie “Teesri Manzil”, Asha started a long and enduring partnership with the music director R.D. Burman. The two got married in 1980.

If the 60s was about Asha gaining confidence, the 70s was about unleashing her confidence in numbers like “Piya Tu Ab To Aaja” (“Caravan”, 1971), “Aao Na Gale Lagao Na” (“Mere Jeevan Saathi”, 1972) and “Yeh Mera Dil” (“Don”, 1978). Unfortunately, these wildly popular songs typecast her as a “cabaret singer”, and it took the better part of the 80s for her to break out of this mould. While R.D. Burman songs like “Piya Bawri” (“Khoobsoorat”, 1980) and “Aur Kya Ahd-e-Wafa” (“Sunny”, 1984) helped, it was her singing in Khayyam’s compositions for “Umrao Jaan” (1981) that silenced all doubters. The songs “Dil Cheez Kya Hai”, “In Aankhon Ki Masti Ke”, “Ye Kya Jagah Hai Doston” and “Justju Jiski Thi” won her the National Award for Best Singer. Not to be outdone, R.D. Burman came back with a set of songs for her for the movie “Ijaazat” (1987) that many consider to be her best - “Katra Katra” and “Mera Kuch Saamaan”.

The next few years were relatively quiet. In 1994, R.D. Burman passed away. Despite the personal blow, the gutsy lady staged a significant comeback in the A.R. Rahman composed “Rangeela” (1995). The 62-year-old Asha sang “Tanha Tanha” and “Rangeela Re” - two of the biggest hits of that year. With “Rangeela”, she started her collaborations with a new generation of music directors that continue till today.

Asha Bhosle won her first Filmfare Best Female Playback Award in 1968 for "Garibon Ki Suno" (“Dus Lakh”, 1966) and out of her 18 nominations, has won 7 more since. Having won a Special Award for Rangeela in 1996, she was awarded the Filmfare Lifetime Achievement Award in 2001. These accolades have come her way despite the fact that in 1979 she had requested that her name not be considered for nominations thereafter. With two National Film Awards and 17 Maharashtra State Awards under her belt, she has been honoured by MTV, Channel V, BBC, FICCI, Zee and many others for her contributions to Indian music. Honoured with the Dadasaheb Phalke Award in 2000 and Padma Vibhushan in 2008 by the Government of India, in September 2009 Bhosle was recognized as the Most Recorded Artist in the world by the World Records Academy.