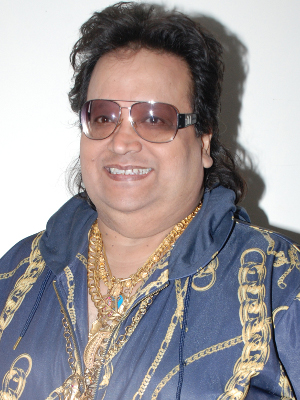 Bappi Lahiri is an iconic Indian musician, who is credited with popularizing disco in Indian film music in the early 80’s. A colorful personality, Bappi is often seen in his trademark tracks suits, sporting heavy chunky gold chains and dark glasses. He is fondly referred to as Bappida.

Born as Alokesh Lahiri in 1952, he is the only son of his musician parents; his mother, Bansari Lahiri and father, Apresh Lahiri were well known classical singers.

He was extremely prolific in the 1980s and the first half of the 1990s, and even though he had hits like “Namak Halaal” (1982) and “Sharaabi” (1984), a large number of his compositions sank into oblivion. There were charges of plagiarism and commercialisation that he couldn't quite get rid of.

In the latter half of 1990s, Bappi Lahiri took a break from composition and singing, but was drawn into the public realm again in 2001, when American R&B singer Shari Watson known as “Truth Hurts” sampled a part of the song “Kaliyon Ka Chaman” from his little known 1981 film “Jyoti”, Bappi sued the music label Interscope Records and the parent company, Universal Music Group. A US court ruled in Bappi’s favor. His song “Jimmy Jimmy” though considered to be plagiarized from the song “T’es OK” by the French band Ottawan, also featured in the Hollywood comedy, Adam Sandler’s “You Don’t Mess With The Zohan”.

Bappi Lahiri is married to Chitrani and has two children, daughter Rema and son, Bappa (also a music director).