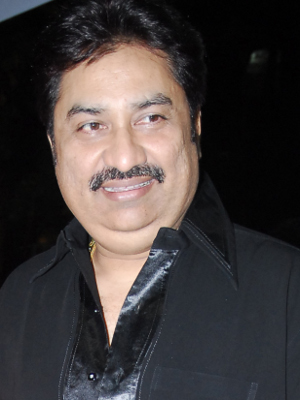 Kumar Sanu, born Kedarnath Bhattacharya in Kolkata on September 23, is a well-known Bollywood playback singer. He was honoured by the Government of India in 2009 with the Padma Shri award. Having sung over 17,000 songs he owns the Guinness World Record for recording 28 songs in a day.

Sanu began his musical training with his father, Pashupati Bhattacharya, vocalist and composer; he was trained as a singer and a tabla player.

Once he graduated in commerce from Calcutta University, he began performing around Kolkata. Though he began his career singing in Kishore Kumar’s style, he soon developed a style of his own.

In 1987, he moved to Mumbai when he was offered a chance by music director and singer Jagjit Singh to sing in “Aandhiyan”. Once in Mumbai, it was Kalyanji-Anandji who used his voice in “Jaadugar” (1989). It was during its recording that they suggested he change his name from Kedarnath Bhattacharya to Kumar Sanu. From here, he went on to sing with composers like Naushad, Hridayanath Mangeshkar, Ravindra Jain, Pt. R K Razdan, Usha Khanna and Kalyanji-Anandji.

The 1990 film “Aashiqui” saw music directors Nadeem-Shravan use Sanu to sing all but one of its songs. His first Filmfare victory for Best Male Playback Singer was for “Ab Tere Bin Jeelenge Hum” from this movie.

In a career spanning two decades he has sung with composers including R.D.Burman, Anand-Milind, Jatin-Lalit, Anu Malik, Nadeem-Shravan, Kalyanji-Anandji, Ismail Darbar, Pritam and Dilip Sen-Samir Sen. With A.R. Rahman he has collaborated on the song “Milgayee Milgayee” from “Kabhi Na Kabhi” (1998).

Other than singing he has also tried his hand at music direction and also produced the Hindi film Utthaan. He has also been a part of the judging panel for Sony TV’s Waar Parriwar and on Zee Bangla TV’s Sa Re Ga Ma Pa-Vishwa Sera.

Sanu won the IIFA artist of the decade award in 2003 and Global Excellence award the following year. In Dayton, Ohio, the Mayor has declared 31 March as Kumar Sanu Day. His Filmfare award for Aashiqui in 1990 was followed by “Mera Dil Bhi Kitna Pagal Hai” (Saajan; 1991), “Sochenge Tumhe Pyaar” (“Deewana”, 1992) and “Yeh Kaali Kaali Aankhen” (“Baazigar”, 1993). In 1994 other than the Filmfare award he also won the Star Screen Award for Best Male Playback Singer for the song “Ek Ladki Ko Dekha” from “1942: A Love Story”.