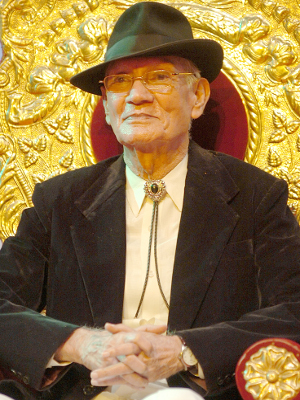 The Rhythm King of Indian cinema, Omprakash Madangopal Nayyar, was born on January 16, 1926 in Lahore. He showed an early interest in music (and disinterest in regular jobs) when he joined All India Radio, Lahore as an artiste at the age of 11. By 17, he had composed two songs, of which one of them - “Preetam Aan Milo” sung by C.H. Atma became very popular. In fact, he reused this tune many years later for “Mr. and Mrs. 55” (1955).

After partition, O.P. moved to Amritsar and then to Bombay. His early film compositions - “Aasmaan” (1952), “Cham Chama Cham” (1952) and “Baaz” (1953) - did not get much attention. A disappointed O.P. wanted to go back to Amritsar but stayed back when he got an offer to compose music for “Aar Paar” (1954). The songs from “Aar Paar” became big hits and O.P. Nayyar’s career took off. Geeta Dutt’s role in this turn around must be acknowledged. Not only did she provide vocals for all songs in “Aar Paar” except one, it was her recommendation that landed O.P. this opportunity.

Offers poured in over the next two years, of which “Mr. and Mrs. 55” (1955) and “CID” (1956) were most notable. His next significant career milestones came in 1957. On one hand, it brought with it “Tumsa Nahi Dekha”, a musical chartbuster and on the other, it gave O.P. his first Filmfare Award for his compositions for “Naya Daur”. “Naya Daur” also saw O.P. switching from Geeta Dutt to Asha Bhosle as his primary female vocalist. It was also during this period perhaps, that O.P. and Asha got romantically involved. So deep was his commitment to Asha, that he never worked with the biggest female vocalist of that time - Lata Mangeshkar.

Unfortunately, O.P.’s strained relationships with artists became a recurring theme and adversely impacted his career in the long term. Through his light compositions, he gave his favourite male singer, Mohammed Rafi, a new voice. Through the first half of the 60s, O.P. - Rafi delivered huge hits for movies like “Ek Musafi Ek Hasina” (1962), “Phir Wohi Dil Laya Hoon” (1963), “Kashmir Ki Kali” (1964) and “Mere Sanam” (1965). Unfortunately, the second half of the 60s did not see the same results and by late 60s O.P. switched over from Mohd. Rafi to the then upcoming singer, Mahendra Kapoor. Although, O.P. continued to work with Rafi later on, their relationship remained strained.

O.P.’s career sputtered along in the 70s and by the end of the decade he retired from Hindi film music. He did attempt a comeback in the early 1990s with a couple of movies but was a shadow of his former self. On January 28, 2007, he breathed his last, following a cardiac arrest.

After a heavily classical 50s, O.P. Nayyar brought a breath of fresh air to Hindi films through his folk and Western inspired music. He single-handedly popularised the “tonga rhythm” with songs like “Yun Toh Humne Lakh Haseen Dekhein Hain” (“Tumsa Nahi Dekha”, 1957), “Maang Ke Saath Tumhara” (“Naya Daur”, 1957) and “Haule Haule Chalo” (“Sawan Ki Ghata”, 1966). But O.P. Nayyar was more than his tonga songs. His evergreen songs are a testament to the fact that O.P. Nayyar’s compositions were as much about melody as they were about rhythm.