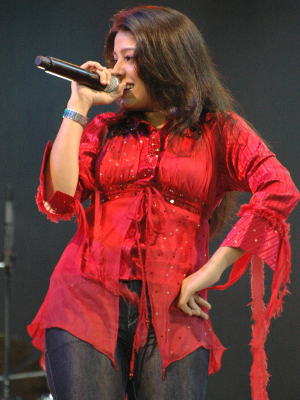 New Delhi-born Sunidhi Chauhan was introduced to music at a young age by her father who was a theatre personality. A child prodigy, she gave first stage performance when she was only four years old. Just when she turned a teen, she got a chance to participate in the TV talent show "Meri Awaz Suno" and went on to win it. The win in "Meri Awaz Suno" bagged her a record contract with HMV. She recorded the album "Aira Ghaira Nathu Khaira" for them but it failed to make any impact.

She got her Bollywood break with the song "Ladki Deewani Dekho Ladka Deewana" ("Shastra", 1996). While the song was quite popular at the time, it didn't really help her career much. After a few years of relative quiet, she got introduced to Sandeep Chowta by singer, Sonu Nigam and sang three songs for the film "Mast" (1999). The film's music did well and her duet with Sonu Nigam "Ruki Ruki" became very popular. Her singing for "Mast" also won her the Filmfare R.D. Burman Award for New Music Talent. She was sixteen and she had arrived.

Sunidhi  has also recorded non-film albums like "Pehla Nasha" (2001), "Ustad And The Divas" (2006) in collaboration with Sandesh Shandilya and Ustad Sultan Khan, and more recently the single "Ab Laut Aa" (2013). In 2006, she sang for the Hindi-dubbed version of “High School Musical”, where she sung all the songs sung in the original by Vanessa Hudgens. She was also a part of Enrique Iglesias’ "Euphoria: Heartbeat India" tour.