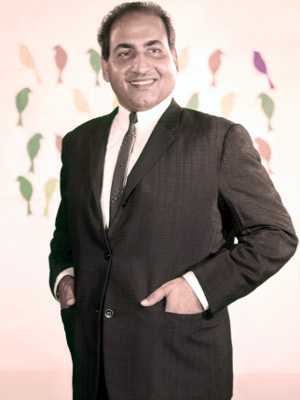 Mohammed Rafi was born on December 24, 1924 in Kotla Sultan Singh in Amritsar. He developed an interest in music early on and, even though he got no support from his religious father, decided to pursue singing as a career. He learnt classical music from Ustad Vahid Khan, Phirose Nizami and Pt Jeevanlal Mattoo. He was a big admirer of K.L. Saigal and even sang as filler in a Saigal show. Saigal was so impressed by Rafi’s singing that he recommended him to All India Radio, Lahore.

Rafi started his playback singing career for the Punjabi film “Gul Baloch” (1944). He moved to Bombay the same year and sang his Hindi film song in “Gaon Ki Gori” (1945). Over the next few years, he got several offers and became fairly well-known. 1948 marked the beginning of a relationship that would prove crucial for his career. It was in this year that Rafi first sang for Naushad. The song was “Yeh Zindagi Ke Mele” (“Mela”). Naushad experimented with Rafi’s voice in “Dulaari” (1949) and “Dastaan” (1950) before using him in as many as three solos in “Deedar” (1951). The magnum opus of their collaboration came with “Baiju Bawra” (1952). “Man Tarpat Hari Darshan Ko Aaaj” and “O Duniya Ke Rakhwale” became huge hits. If Rafi’s vocal virtuosity won him critical acclaim, the spirituality in his voice won him popular acclaim. Mohd Rafi had arrived.

Rafi became the dominant male voice in Hindi films through the rest of the 1950s and worked with all the big composers of that time. For O.P. Nayyar, he revealed a light and breezy facet of his voice in songs like “Dil Par Hua Aisa Jadoo” (“Mr. & Mrs. 55”, 1955). For S.D. Burman, Rafi expressed restrained angst through “Yeh Duniya Agar Mil Bhi Jaye To Kya Hai” (“Pyaasa”, 1957). Shankar - Jaikishan were probably the only big name that used him sparingly during this period.

The year 1960 brought with it the film “Chaudhvin Ka Chand”, where the title song won Rafi his first Filmfare Award for Best Male Playback Singer. So wide was Rafi’s appeal during the 60s that he’s credited with the success of several music directors in this period. Roshan received popular acclaim only after he used Rafi for “Zindagi Bhar Nahi Bhoolegi” (“Barsaat Ki Raat”, 1960). Madan Mohan’s career really took off after he switched from Talat Mehmood to Rafi after the failure of “Jahan Ara” (1964). Rafi helped the young Laxmikant - Pyarelal become big hits overnight with “Chahoonga Main Tujhe” (“Dosti”, 1964). Even R.D. Burman who one usually associates with Kishore Kumar, renewed a sagging career with Rafi’s voice in “Teesri Manzil” (1966). Even Shankar - Jaikishan relented and started using Rafi as their lead male vocalist in the 60s. Meanwhile, his old relationships with Naushad and O.P. Nayyar continued to flourish.

The end of the 60s, saw the superhit music of “Aradhana” (1969) and with it, the rise of a new phenomenon called Kishore Kumar. Sadly, it also marked the end of Rafi as the dominant male singer in Hindi films. However, he continued to sing through the 70s and even staged a comeback of sorts in the late 70s with songs like “Kya Hua Tera Wada” (“Hum Kisi Se Kam Nahin”, 1977) and “Dard-e-dil” (“Karz”, 1980). His death on July 31, 1980 came as a rude shock to Indian music lovers.

At various stages of his career, Rafi was considered the voice of Guru Dutt, Dev Anand and Shammi Kapoor. It is hard to imagine any other singer represent in his voice Shammi Kapoor’s flamboyant onscreen presence, the way Mohammed Rafi did. The film industry also credits him with having made the careers of many lesser-known actors like Rajendra Kumar, Biswajeet, Sanjay Khan and Joy Mukherjee.

Rafi’s death on July 31, 1980 came as a rude shock to all. He was not just a great singer but a thorough professional and good human being.