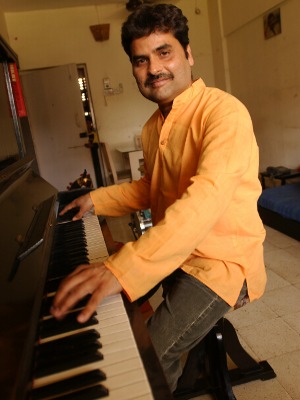 Award winning composer-director Vishal Bharadwaj was born in Bijnor, Meerut. Under the influence of his poet-lyricist father, Ram Bharadwaj, he grew up in an environment steeped in films, music and poetry. So proud was his father of his musical talent, that he told music director Usha Khanna about a tune Vishal had composed as a young boy. Some years later, Usha Khanna used that tune for the film “Yaar Kasam” (1985).

After the death of his father in 1984, a heart-broken Vishal went to Delhi to pursue college education. During those years, he started playing harmonium for friends who were ghazal singers. After college, he got a job as an A&R manager in a music company called CBS (which later became Pan Music) owned by R.V. Pandit. While working at CBS, he moved to Mumbai and was introduced to lyricist-filmmaker Gulzar. Thus, the famous title songs for Doordarshan’s “Jungle Book” and “Alice In Wonderland”, came into being. Gulzar became his mentor and their collaboration yielded several films and songs over the years.

As a composer of Hindi film music, he garnered critical acclaim as well as popularity with his very first film, “Maachis” (1996), by switching effortlessly between a foot-tapping “Chappa Chappa Charkha Chale” and a soulful “Paani Paani Re.” After he bagged the Filmfare R.D Burman Award in 1996 for “Maachis”, there was no stopping him. As a composer, Vishal Bharadwaj seemed to attract the attention of film makers who wished to tackle offbeat subjects. He composed music for “Satya” (1998), “Chachi 420” (1998), “Godmother” (1999) and “Hu Tu Tu” (1999). “Godmother” won him his first National Award as a composer.

Vishal is married to singer Rekha Bhardwaj, whom he met while in college. He has employed her voice for a number of his films as a composer as well as a director. Notable among their collaborations is the song “Badi Dheere Jali” (“Ishqiya”, 2010), which won the husband-wife duo the National Awards for Best Music Direction and Best Female Playback Singer.