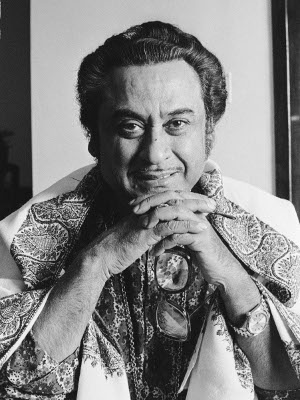 His father encouraged his singing by rewarding him with 4 annas for singing a song from his brother Ashok Kumar’s movie and a rupee to sing like K.L. Saigal. Kishore Kumar moved to Mumbai in 1940 and got acting opportunities alongside Ashok Kumar in Bombay Talkies productions. Though he started his career as an actor, it was singing that was close to his heart.

Kishore Kumar's playback singing breakthrough came in “Ziddi” (1949) with instructions from music director Khemchand Prakash to sing like Saigal. Drawing inspiration for his inimitable yodeling from the American country singer, Jimmie Rodgers, Kishore Kumar developed his own style with S.D. Burman as a mentor and by the 1950’s became a prominent voice in Bollywood. His first big hit was for the Dev Anand starrer “Munimji” (1954) followed by various movies starring Dev Anand including classics like “Maana Janaab Ne Pukara Nahin” and “Chhod Do Aanchal” from “Paying Guest” (1957). He was known as the “voice of Dev Anand” during this period. Despite these hits, he never really took off as a singer and was viewed more as a singer-actor known for comic roles in movies like “Chalti ka Naam Gadi” (1958) and “Half Ticket” (1962).

He continued to explore himself during this period. In 1961, he composed the music for “Jhumroo” and wrote the lyrics for the title song. In 1964, he produced, directed, wrote and composed music for “Door Gagan Ki Chaon Mein”. He also grew as a singer in these movies singing gems like “Thandi Hawa Yeh Chandni Suhani” and “Koi Humdum Na Raha” for “Jhumroo” and “Aa Chal Ke Tujhe” and “Koi Lauta De Mere” for “Door Gagan Ki Chaon Mein”.

However, it was only in 1969, that a 40-year-old Kishore Kumar gained widespread popularity with “Roop Tera Mastana” and “Mere Sapnon Ki Rani” for “Aradhana”. While the music of “Aradhana” is officially credited to S.D. Burman, it was really R.D. Burman who recorded these songs. “Aradhana” marked the beginning of a long and remarkable partnership between Kishore Kumar and R.D Burman. Songs such as “Chingari Koi Bhadke” from “Amar Prem” (1971), “Musafir Hoon Yaron” from “Parichay” (1972) and “Diye Jalte Hain” from “Namak Haraam” (1973) brought out the best in them. Kishore became the dominant male voice in the 70s, and continued to be the voice of choice in the 80s despite the decreasing importance of music in movies.

Kishore Kumar’s voice was reflective of the emotions which was required for the song. He could easily straddle any voice-comic, tragic, romantic, et al, as the famous radio show host Ameen Sayani aptly stated, "He was perhaps the most versatile singer that the Indian film industry has ever known. He could handle comedy and pathos. And although he never had any formal training, he could delve into classical songs as well.”

Kishore Kumar was a complex personality and not very well understood. Although he was known to be a whimsical and eccentric character, he had a serious side to him. During the Emergency, his songs were banned on the radio for some time after he refused to a request by Sanjay Gandhi to sing for an Indian National Congress rally. Despite his outwardly comic nature, his personal life was tragic. He went through three unsuccessful marriages - with Ruma Guha, Madhubala and Yogeeta Bali - before finding some solace with Leena Chandavarkar. His sons, Amit Kumar (from his marriage with Ruma Guha), and Sumit Kumar (from his marriage with Leena Chandavarkar) went on to become singers in Bollywood.

Kishore Kumar died of a massive heart attack on October 13, 1987. With a career spanning 40 years and more than 4000 songs Kishore Kumar will remain immortal in the hearts of his fans.